My son and I are keeping busy during these social distancing times by working on a project to track current Covid-19 data. We are collecting that data to graph percentages and numbers of positive/negative infections, deaths and hospitalizations. Using data from the Covid Tracking website we have assembled the following information about our research below.  (Please note that we are in the very early stages of assembling this information and that this page is continually updated throughout the day to make corrections, additions and or other notations.)

Once we extrapolated the data we automated the percentage rise for each of these areas on a daily basis starting when the data was first collected on March 4th, 2020.

Thus far we are only tracking US based data, which includes 56 states/territories. (Yes, I realize there are only 50 states) There are 6 US Territories included in this data tracking, including but not limited to Guam, Puerto Rico, Northern Mariana Islands Virgin Islands, etc. If you are interested in viewing the data on a state by state basis, please visit the Covid Tracking website here.

We have not broken this data down on a state by state basis, nor have we broken it down worldwide. This is a combined total of all 56 states/territories only. The source data is provided by a Covid Tracking website that pulls and updates the historical data at regular intervals 24/7.  We are currently pulling that data via API and injecting it into our own program that is generating the percentage and number output at regular intervals. We are also providing graphing data and projections to illustrate exponential growth while attempting to predict the outcome based on the Sigmoid curve.

This project is not based in science. It based purely on math using only the data we are able to gather. This is not meant to be a source for panic, fear or hope. It is merely produced to keep my son’s education moving, keep him on target and on task while keeping his mind focused on learning.  Call it an extra credit project for school when this is all over.

The following information displays the output from the Covid Tracking Project’s API and includes visual aids/graphs to help you better understand the data. We have provided further graphing data below to project a timeline for the outcome of this virus spread and it’s peak, leveling off period and decline.  These are not scientific predictions. Again, this is based on math, numbers, percentages and a better understanding of the data and trends as we see them after extrapolating the data and graphing it over time based on the numbers as they rise, fall and or change.  Any drastic change in the numbers over the next several days could significantly impact the predicted outcome.

We hope this information will be useful and welcome any comments, questions, criticisms, analysis and or corrections to incorrect data or calculations.

We chose about 60 day window to monitor data and graph the viruses progress.  This 60 day window starts on March 4th, 2020 (when the data begins) and ends on May 1, 2020.  The end date was an arbitrary guess on a possible end date and should not be regarded as an end to this problem.

Our spreadsheet has gotten too long to fit into one screenshot, so we’ve added a link instead. The spreadsheet in the link contains the current data pulled from the Covid Tracking website. It is broken down by data starting on March 4th, 2020 when they began collecting data.  We have listed that data along with our own columns indicating the percentage and number rise for each category.  Some categories, including Pending and Hospitalizations may not have a percentage/number column due to the fact that there is either not enough data collected at this time to do so, or the information is not applicable to this project.

What we are attempting to do here is illustrate the number and percentage rise of positive/negative tests and deaths on a daily basis, as well as provide a nationwide death rate based on those results.

You can see the same trends mapping both positive and negative result increases as testing continues to grow.

To better understand the data we need to take a look at three different outputs which we have defined as:

At the end are two graphs that don’t fit any of the above categories which are:

The following graphs very closely follow an exponential curve which indicates a rapid increase in those respective areas over time. 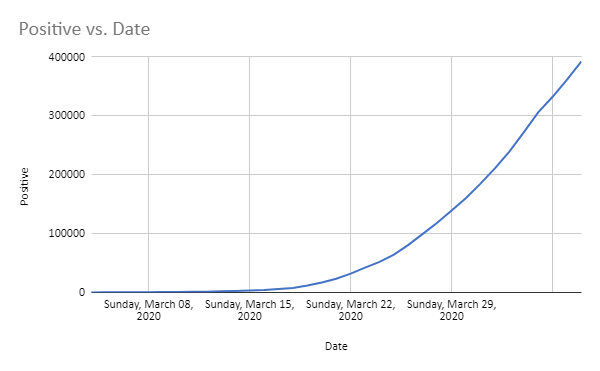 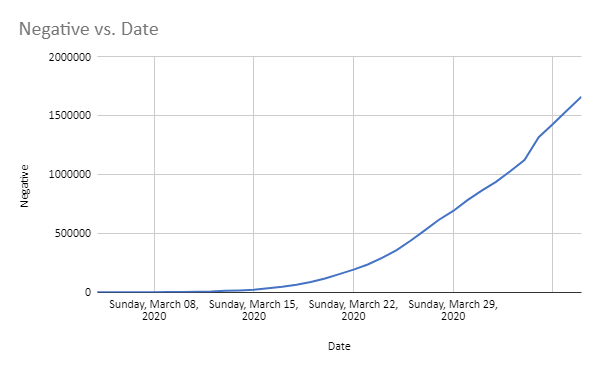 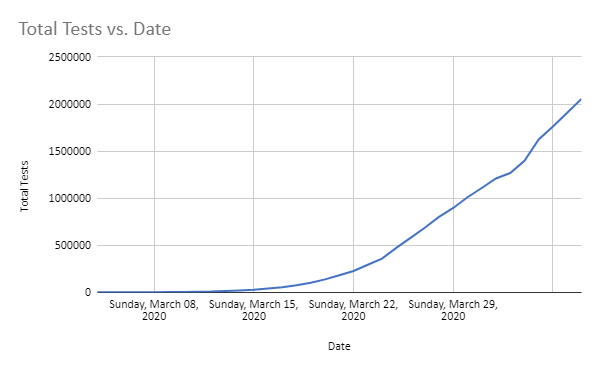 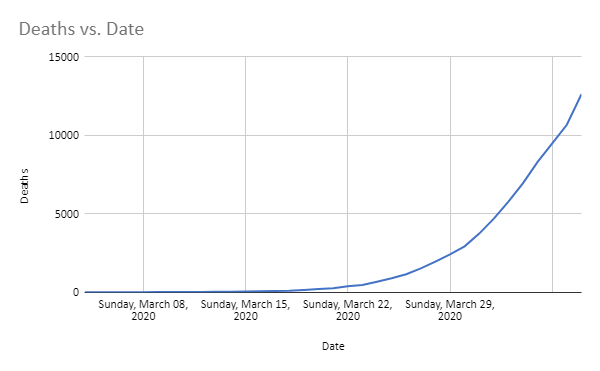 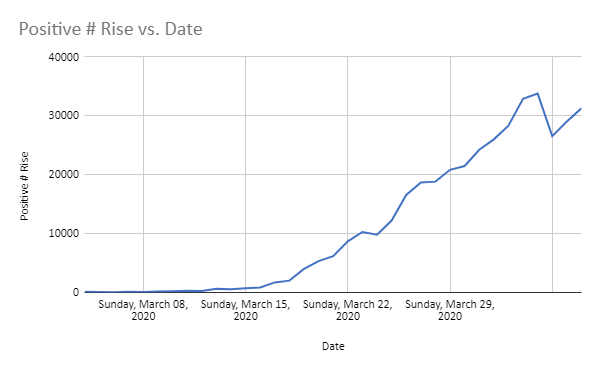 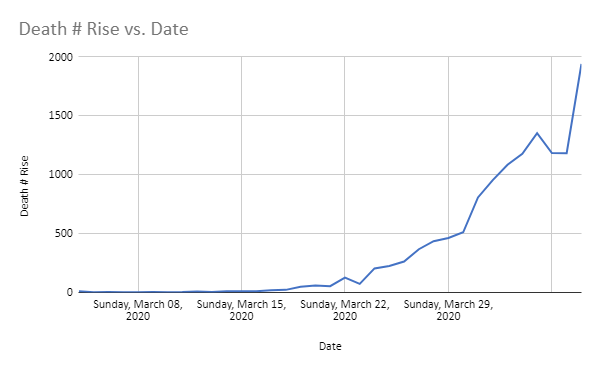 These graphs seem to start off following an exponential curve, but later turn out to vary wildly from that. 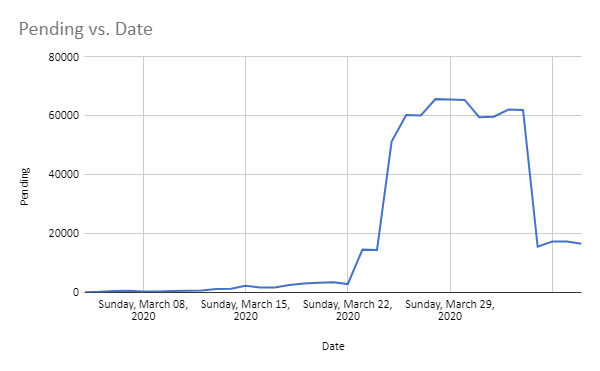 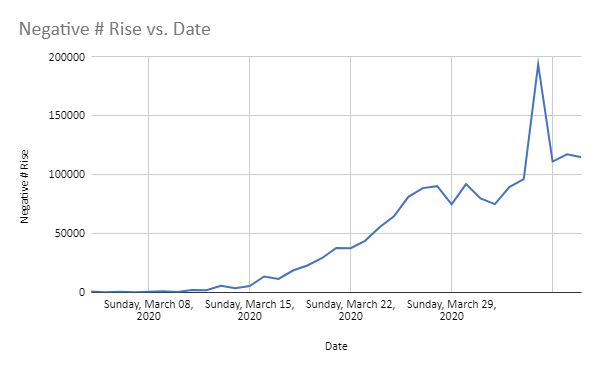 These graphs all fluctuate and oscillate greatly as time goes on; however, they all seem to trail off and down towards the end. 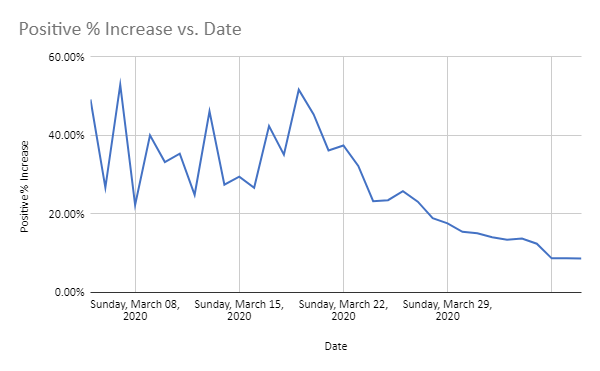 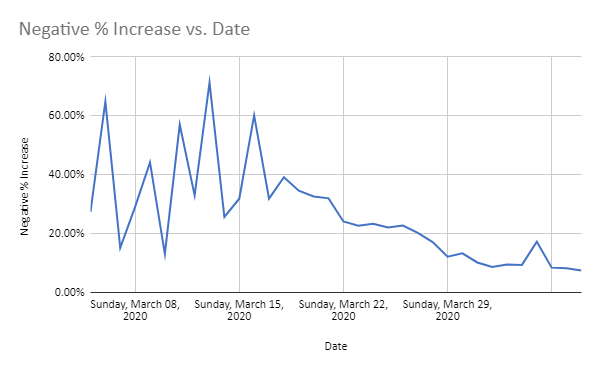 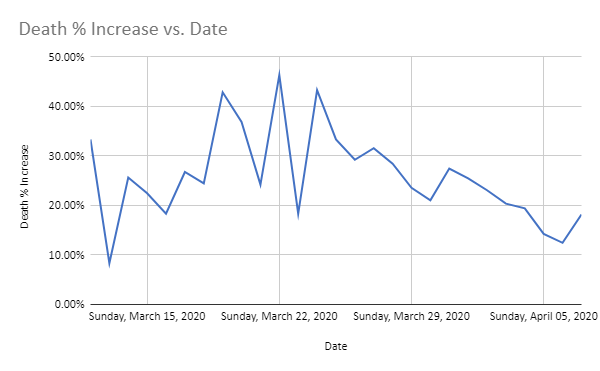 This graph measures what percent of the positive cases dies each day. It rapidly declines at first until leveling out. The percentage then goes slightly up towards the end. 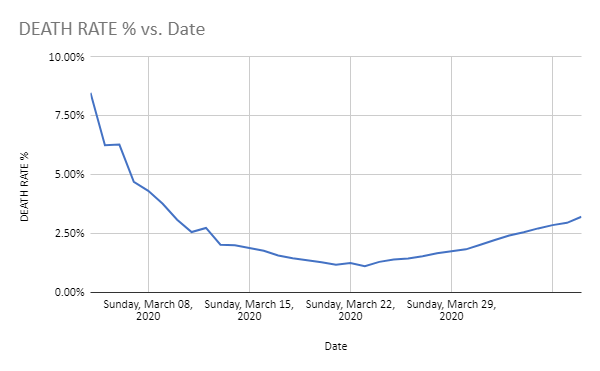 This graph only has a few data points as of right now, but it appears as though it might become exponential in the future, but that’s purely a guess. Although, from what we have right now, it’s easy to tell it curves upwards as time goes on which is consistent with the graphs under clear exponential growth. 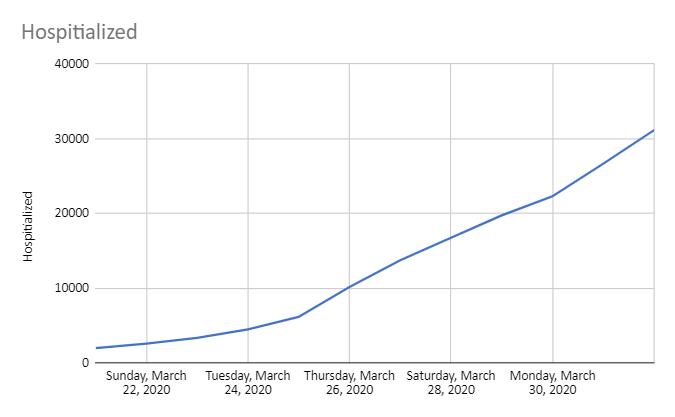 SIGMOID FUNCTION
Using the Sigmoid curve, we can predict the outcome of certain areas as time progresses. We can also attempt to track exponential growth and define a time when the virus and its affects will peak and level off. The orange curve was generated using the following formula:

The Sigmoid curve is a mathematical concept which has been widely used to model the natural life cycle of many things, from biological organisms, to schools and companies, marriages and careers. 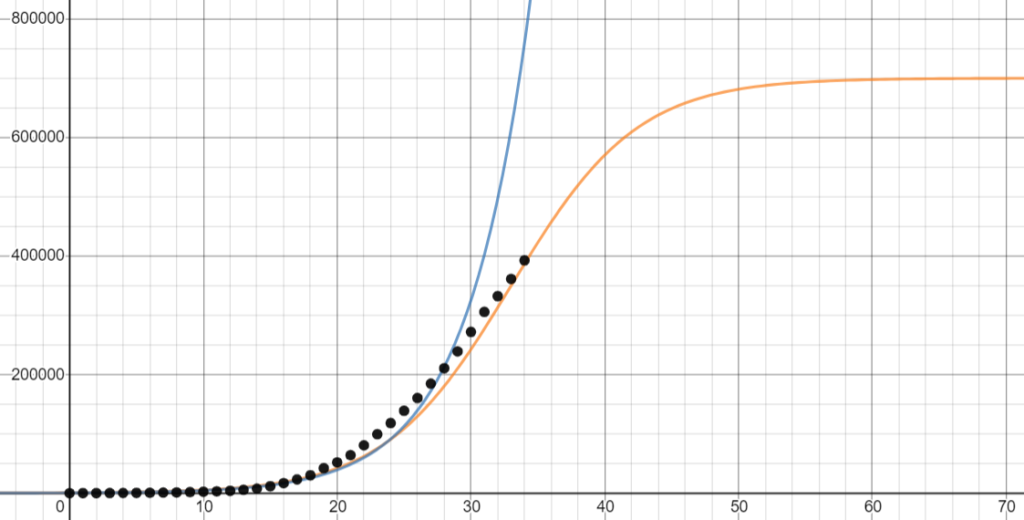 Based on the above data it can be assumed that we may have reached the beginning of the peak as early as March 22nd-23rd. Assuming the trend and incoming data remains consistent, it may be assumed the level off and curve could begin as early as April 12th, 2020.

This does not take into account the fact that we are missing a crucial number in the data stream.  “Recoveries” do not seem to be tracked at this time. Without a conclusive indication of the number of recoveries vs. deaths, it is difficult to predict with a great degree of accuracy if the current trend is consistent.  As information we receive changes, so too will these graphs and our analysis.

As more data continues to come in for the number of “Hospitalizations” we will begin tracking these percentage growths as well.

We plan to continue monitoring and updating the data to better provide the graphing and changes in real time. If you see any descrepencies in the data, output or calculations, please free to let me or Taylor know.  If we have more time, we may do a state by state break down, staring with Wisconsin first. We may also look at the world wide trends and attempt to map/graph that data as well to look for a pattern in the Sigmoid curve.

If you do have any comments or corrections, please feel free to contact me or Taylor at jer@mia.net or taylor@mia.net