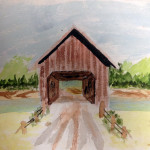 I have been using watercolors since I could hold a pencil.  It is my favorite 2D medium.  Watercolor to me is like sculpting.  The forgiving and lasting nature of the paint allows both an additive and reductive process.  I find you can pull the image out of the paint rather than gobbing layers of oil paint on a canvas. 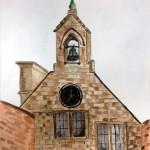 I formerly trained in the art of watercolor under the direction of Mrs. Leone Cooper in St. Louis Missouri from 1978-81′. Much of my youth was spent painting barns, churches, trees and landscapes. So much of what becomes of a water colorist consists of the illusion of depth and imagery.  Subtlety and a hint of realism.  I am more interested in the details and have on occasion had a tendency to overwork a piece as a result.

I was surrounded by artists as a child. My father is a graduate of Kansas State University in Art. My late Grandmother Lia was an artist, as is her sister my Aunt Betti.  What I’ve learned over the years has been greatly influenced by their own work and teaching.

The works contained here date from the 1970’s to present.  Works were produced throughout the mid-west and in the United Kingdom.

I have continued to use watercolors on and off again throughout my adult life and most recently have begun an exploration that has allowed me to realize my own style.  My influences in abstract art range from Joseph Mallord William Turner, Wassily Kandinsky, Joan Miró, Alexander Calder, Henri Matisse, Piet Mondrian and Jackson Pollock. 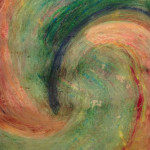 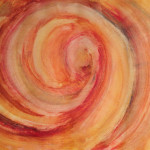 While I thoroughly enjoy painting realistic compositions. My goal for over 40 years has been to remove the literal from my work.  To erase the illusion of depth and realism and replace it with the impression of light and depth through that light and color.  I work primarily with 2 or 3 brushes, paper towel and tissue.  I apply the color directly to the paper and only mix color directly on the paper itself.  The compositions themselves are rarely drawn on the paper. Rather I work from an image in my head.  More often then not that image is PULLED out of the piece by removing paint in a rather deliberate motion.

It has taken me nearly 40 years to finally find a unique style and technique.  The process leaves the viewer wondering if they are looking at oils on a canvas, pastels, acrylic on masonite or some other medium.  As an artist, nothing is more pleasing than to have developed a unique process you can finally call your own.  I have dubbed this movement, Neo Romanticism – a “New” form of Abstract Expressionism.